Finding out that your child has a diagnosis of Trisomy 18 is life-changing. You face an uncertain future and have many, many questions.

It is very likely that prior to learning of your child’s diagnosis, you were unfamiliar with Trisomy 18. While considered rare medically, Trisomy 18 is a life-threatening genetic disorder that impacts about 1 out of every 2000 pregnancies in the U.S. You and your child are not alone.

We have the resources and answers you need to understand your child’s diagnosis and make informed decisions about their health. We can also connect you with other families in our community who have faced these same challenges.

Trisomy 18, also known as Edwards syndrome, is a condition that is caused by an error in cell division, known as meiotic disjunction. When this happens, instead of the normal pair, an extra chromosome 18 (a triple) results in the developing baby and disrupts the normal pattern of development in significant ways that can be life-threatening, even before birth. A Trisomy 18 error occurs in about 1 out of every 2000 pregnancies in the United States and 1 in 6000 live births. The number of total births is much higher because it includes significant numbers of stillbirths that occur in the 2nd and 3rd trimesters of pregnancy.

Unlike Down syndrome, or Trisomy 21, which also is caused by an extra chromosome, the developmental issues caused by Trisomy 18 are associated with medical complications that are more potentially life-threatening in the early months and years of life. Studies have shown that only 50% of babies who are carried to term will be born alive. At birth, intensive care admissions in Neonatal Intensive Care Units (NICU’s) are routine for infants with Trisomy 18.

Some infants will be able to survive to be discharged from the hospital with home nursing support to assist with care by the parents. And although 10 % or more may survive to their first birthdays, there are children with Trisomy 18 that can enjoy many years of life with their families, reaching milestones and being involved with their community. A small number of adults (usually girls) with Trisomy 18 have and are living into their twenties and thirties, although with significant developmental delays that do not allow them to live independently without full-time caregiving.

Are there different types of Trisomy conditions?

While there are different types of Trisomy 18, this does not mean one is better for a child than another. With each type, there is a range of possibilities. Some children are medically fragile while others thrive; some children walk while others are confined to wheelchairs. It is hard to say how the extra chromosome will impact an individual child from the genetic diagnosis alone.

What are the characteristics of Trisomy 18?

Typical characteristics of Trisomy 18 include:

What Is the Impact of Trisomy 18?

The extra genetic material from the extra eighteenth chromosome can cause a wide variety of medical and developmental problems (sometimes referred to as birth defects) in the developing child in the mother’s womb and after birth. Just as children with Down syndrome can range from mildly to severely affected, the same is true for children with Trisomy 18.

This means that there is no hard and fast rule about what Trisomy 18 will mean for a specific child. Each child has their own unique profile of how Trisomy 18 is affecting their developing body and organs. However, all studies on survival rates show that there is a high mortality rate for children with Trisomy 18 before or shortly after birth.

How Is Trisomy 18 Diagnosed?

Most cases of Trisomy 18 are diagnosed prenatally in the United States. Regardless of whether the diagnosis is made prenatally or postnatally (after birth), the process is the same. A sample of the baby’s DNA is extracted from a blood sample or other bodily cells or tissue and is cultured to examine a picture of the chromosomes called a karyotype.

A lot of prenatal testing is available which may indicate Trisomy 18. It is important to understand that there are two types of testing: screening and diagnostic.

What is a Screening Test?

These tests indicate a risk or likelihood that Trisomy 18 is present. These tests take the results of everyone who has had the same testing, and they compare your specific results with that group. Then they use statistics to identify the odds that it is present in your child, based upon the number of times others with the same test results have had children with Trisomy 18 in the past.

This is much the same way that weather is forecast, by saying there is a 20% chance of rain because 20% of the time when the conditions were the same, it has rained. Just as the weather forecast is not completely accurate, screening tests are not a diagnosis but only an indication that the risk is higher than normal.

The following are screening tests, which CANNOT diagnose Trisomy 18:

Ideally, the quad screen is done between weeks 15 and 18 of pregnancy — during the second trimester. However, the procedure can be done up to week 22.

If the quad screen indicates an increased chance of one of these conditions, you might consider diagnostic testing to determine whether your baby has Trisomy 18.

Ultrasound (standard, level II, level III, 3D)
Diagnostic ultrasound, also called sonography or diagnostic medical sonography, is an imaging method that uses high-frequency sound waves to produce images of structures within your body. Ultrasound is used during pregnancy to check the baby’s development, the presence of multiple pregnancies and to screen for conditions such as Trisomy 18.

If fetal abnormalities are detected, you may be offered further tests to confirm the diagnosis, such as amniocentesis and chorionic villus sampling.

What is a Diagnostic Test?

These tests check actual cells and can determine if Trisomy 18 is actually present. This is a diagnosis since the condition has actually been found in the cells.

The following are diagnostic tests, which CAN diagnose Trisomy 18:

CVS (Chorionic Villi Sampling)
Chorionic villus sampling (CVS) is a prenatal test in which a sample of chorionic villi is removed from the placenta for testing. The sample can be taken through the cervix (transcervical) or the abdominal wall (transabdominal).

During pregnancy, the placenta provides oxygen and nutrients to the growing baby and removes waste products from the baby's blood. The chorionic villi are wispy projections of placental tissue that share the baby's genetic makeup. The test can be done as early as 10 weeks of pregnancy.

Chorionic villus sampling can reveal whether a baby has a chromosomal condition, such as Trisomy 18 or Down syndrome, as well as other genetic conditions, such as cystic fibrosis.

Amnio (Amniocentesis, FISH test)
Amniocentesis is a procedure used to take out a small sample of the amniotic fluid for testing. This is the fluid that surrounds the fetus in a pregnant woman. Amniotic fluid is a clear, pale yellow fluid that:

Along with various enzymes, proteins, hormones, and other substances, the amniotic fluid contains cells shed by the fetus. These cells have genetic information that can be used to diagnose genetic disorders, such as Trisomy 18, and open neural tube defects (ONTDs), such as spina bifida.

The fluid is sent to a lab so that the cells can grow and be analyzed. Results are most often ready in about 10 days to 14 days, depending on the lab.

Knowing which test was used is important in deciding what your next steps are. If a screening test has resulted in an elevated risk of Trisomy 18, a diagnostic test can be performed to determine whether your child has Trisomy 18. If a diagnostic test indicates a Trisomy 18 diagnosis, you will be faced with making decisions about your child’s care. 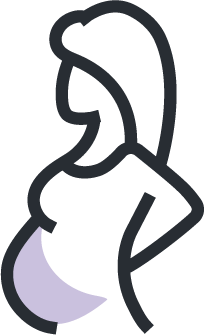